It isn't being John Malkovich, but it is being me

No I didn’t make a typo in that blog title. All my Parks and Rec fans will recognize it. A friend of mine posted this online today and it was a really great reminder for me (minus the lack of a comma in “Its”…I’m a proofreader, can’t turn it off!) and hopefully will be for you guys also. 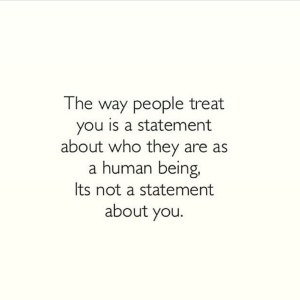 In keeping with the not taking things personally, I think this is a great reminder on the same level. We are all going through things that 99% of the people around us probably have no idea about. We have past pain, current pain, a plethora of bad experiences and who knows what else all swirling around in our brains and swimming in our pool of emotions. I think when someone is rude or treats us poorly it’s easy to forget that. We automatically assume we must have done something wrong or said something stupid. I have a person who does this on a frequent basis with me. Sometimes, not going to lie, it makes me want to cry. But I have to remind myself not to take it personally because it has nothing to do with me and everything to do with him. I think a lot of with disabilities are unfortunately really used to being teased or treated poorly and it’s hard, if not impossible, to not take that personally.

I don’t think this idea means people should be excused from treating others poorly…definitely not. Conversely, I don’t think it’s meant to say everyone else is horrible and we’re super awesome because that person treated us badly. But I think we can use the knowledge it brings for our own good. So we aren’t constantly beating ourselves up so often. So we can be kinder to ourselves. I think simply understanding that the other person is a flawed human being just like us and understanding they might have bigger things going on in their life that leads them to lash out can bring a lot of inner calm. Life is short and there are so many moments that might come up at the hands of other people that try to rob us of our happiness. That unfortunately will never change. But what can change is our reaction to it. Our ability to let it permeate that happiness. It’s an uphill battle for sure, but I think it’s one worth fighting.

Once upon a time there lived a differently abled thirty-something trying to maneuver dating, friendships, travel, and the world. This is her story...